The Chiquitania region receives its name from the native inhabitants of this area, the Chiquitos or Chiquitanos. Here Jesuit reductions (mission towns) were settled during the second half of the 17th Century (between 1691 and 1760). They remain in time as an extraordinary legacy because they are the only Jesuit missions in South America which were not destroyed after the Jesuits were expelled from the Spanish colonies.

The growing interest in the unique synthesis of Jesuit and native Chiquitano culture in the South American interior resulted in Unesco declaring the region a World Heritage Site in 1991.

Today it is possible to appreciate the beauty of the religious architecturethanks to the German architect Hans Roth and his team of experts who restored the churches of these centuries-old Missions, recovering their ageless splendour.

Thanks to 25 years of painstaking restoration work, directed by the late architect Hans Roth, the centuries-old mission churches have been restored to their original splendor.

DAY 1: At 7 a.m. Departure to San Javier, on the way there are beautiful towns such as Cotoca, Pailas, Pailón, Los Troncos. Arrival in San Javier, this mission is the oldest, dates from 1691, is in a landscape of hills and forests; its traditional houses with sun-dried brick walls are decorated with missionary motifs, creating a perfect atmosphere that highlights the majesty of this place. The trip continues to Concepción, lunch, on the way you can see different granite rock formations. Arrival to San Ignacio, through a landscape of lagoons and forests inhabited by wild endemic fauna. Dinner and rest.

DAY 2: Breakfast, departure to the most isolated Jesuit Missions, to appreciate the most genuine traditions. Visit the churches of San Miguel and San Rafael to observe the decorations and sculptures made by the indigenous population. Continuation of the trip to the temple of Santa Ana: this is the smallest church, and also the one that best preserves its original missionary spirit. Lunch and return to Concepcion. Dinner and rest.

DAY 3: Breakfast. Visit the Concepción church, an 18th century masterpiece, and the Missionary Museum to see the carvings on the pillars that support the churches. Continuation of the trip to San Javier and return to Santa Cruz. 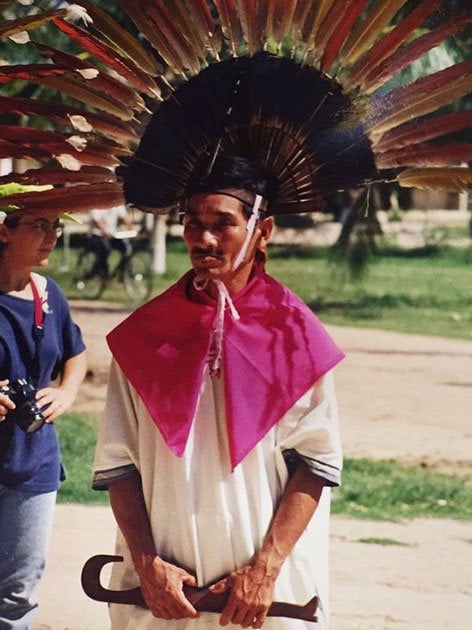 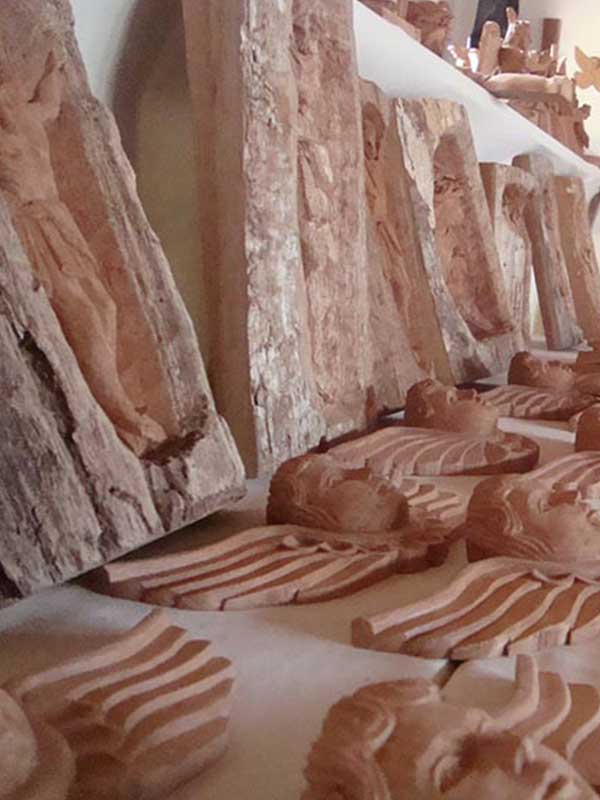 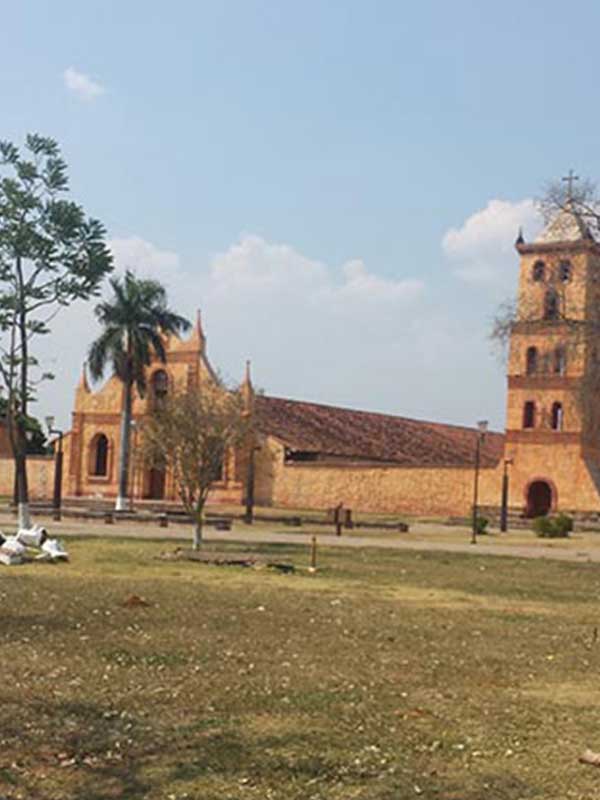 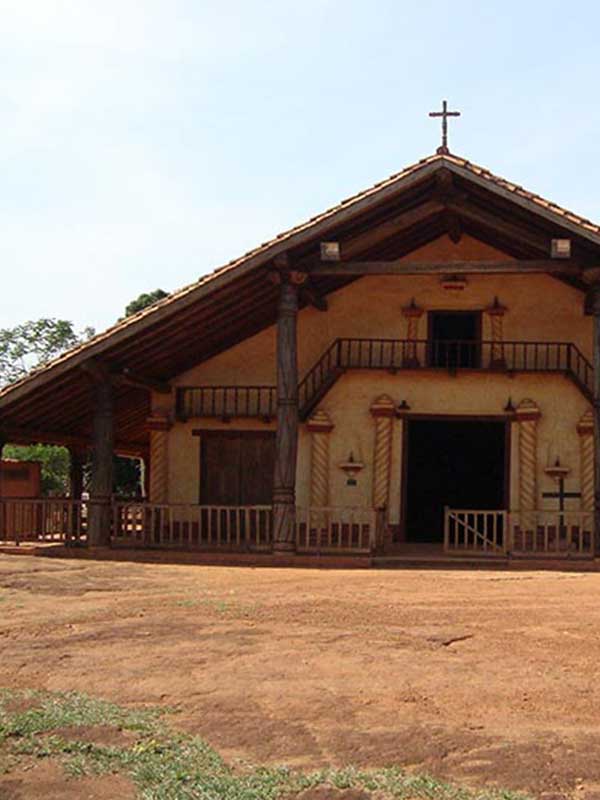 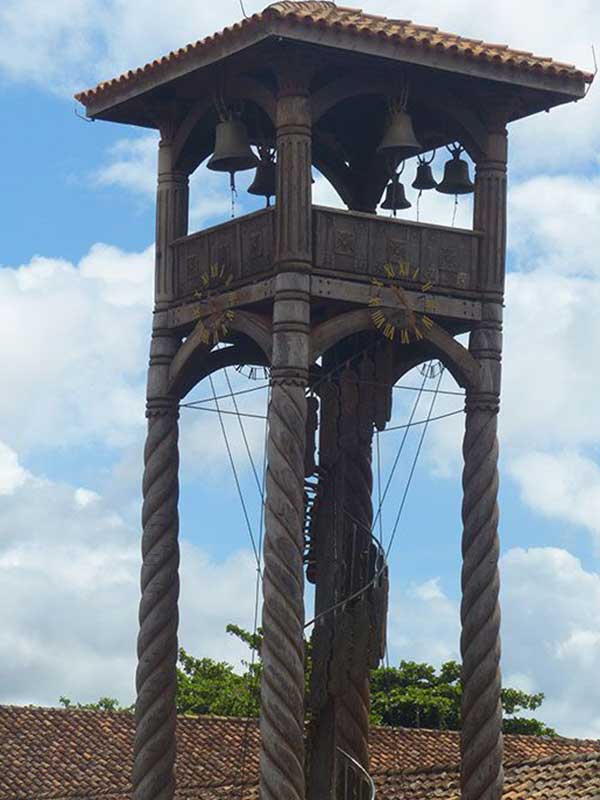 Your form has been submitted

Thank you %NAME% for sending your query.
You can view your request anytime from this link below:
%TRACK_LINK%
We have also attached a copy of your submission.

We faced problems while connecting to the server or receiving data from the server. Please wait for a few seconds and try again.

If the problem persists, then check your internet connectivity. If all other sites open fine, then please contact the administrator of this website with the following information.

Some error has occured.

My name is Marcelo, I am 29 years , born and bread in La Paz, Bolivia. in have been working in tourism since I was 16 years old and I'm passionate about my country, my culture, and my city. I love meeting new people and teaching and learning form the people I meet. I see travelling as a way to broader my horizonts. Metting people on their travels and learning about their backgrounds opens a window into their personality and their lives. Even though I studied political science, my time passion has always been tourisim, hence I changed to make my vacation into my vocation. I want tourists to become as passionate about La Paz and Bolivia as I am so that when they leave their live are enriched. I also have a passion for food, travel, and culture.
×

My name is Flor Pamela, I worked in the hotel sector for approximately 7 years in one of the most important hotels in Bolivia, I was in charge of the reservations, over time the Hotel developed a small tour operator, and there I discovered my interest in inbound tour operations. So, now I am in Altitude, one of the fastest growing companies in the country’s tourism sector. Here I develop my capacity in the Inbound Operations Department, the work is very active and interesting because of the movement that Altitude has.

My name is Viviana, I’m a part of Altitude’s team for almost 2 years now. I graduated in tourism, and my position in the company helps me to develop many skills that I acquired during my preparation. As I am passionate about my career I find that Altitude is the perfect scenery to grow and improve my abilities. I am a Bolivian that is completely proud to be born in a country with such diversity and magic, and I also feel lucky to be able to show this awesomeness to the world.

I’m Daniele, I started working in inbound tourism 8 years ago in a small company because I love the organization of programs, attention to details and customer service Then, I worked in a large inbound tourism company with many years in the market and I felt that it was time for a change, so… here I am in Altitude Adventures, one of the fastest growing companies in the tourism sector, this change represents a challenge for me since I can apply the experience acquired and college education in a new project. Bolivia has incredible places totally worth visiting, which makes my work an interesting and complete activity. I’m happy to be part of the Altitude team.
×

My name is Leidy, I could define myself as a lover of her profession. Before studying tourism as a career I was always passionate about knowing different cultures and learning new languages. Thanks to my profession I had the opportunity to know my country and the immense cultural wealth that we have and that the world deserves to know. With almost eleven years of experience working in different areas of tourism, I can say that tourism is not only my profession, it is my vocation, my passion. I love the challenges and working in Altitude, represents a great challenge and the opportunity to continue growing professionally.
×

I’m quite a creative and dinamic person, a team worker and patriotic young bolivian guy.
×

Hi! I’m Agus by being 25 years old I define myself as a easy/outgoing, respectful and caring man. So far I’ve accomplished lot of things but I’m still in the pursuit of happiness… if you ask me what I’m passionate about I will say dancing. I’ve been dancing “Caporales” wich is a traditional dance from Bolivia my whole life, besides that I like to read, to travel and to have new and exciting experiences My main goal in life is to achieve as much as possible while I can, and to make great memories about it. I always say that life isn’t about finding yourself life is about creating yourself.
×

I define myself as a person committed to the work I do. I am passionate and very dedicated to the tasks and goals that I set for myself. A passion for traveling, exploring, living new experiences through history, nature, people. What moves me in this life is knowledge, the desire to obtain more and more the knowledge of everything.
×

My name is Naydi Laura Trujillo Revollo and I am 23 years old. The most important thing for me is my family, my boyfriend and our little puppy named Tattoo. I love to travel and to know new places. New Adventures? I’m in! I am very cheerful, easy going and open-minded, but I maintain my values and beliefs. Do what you have to do to be happy, without causing anyone harm

I like my job with a little bit of sparkle. I love weekends having amounts of moments in family, watching movies, listenig music, spontaneous trips, and learning about all the things I thought I knew but now realize I had no idea about. Perfect days are going for a hike, followed by a visit to a new local cafe or trying a new dinner spot and taking a walk nearby. I work hard during the week, fill my weekends with activities, and definitely can be a big ball of energy at times. So, I will be here to help you!

My name is George Poma, I was born in a tropical and a wonderful place called Sorata, I´m a tourism professional I graduated from Catolica Boliviana San Pablo University. Currently I work in the best travel agency in la Paz which is Altitude Travel as biking assistant manager. I feel so happy working in this travel agency, because I love tourism industry, my job consist on make to following up the death road biking coordinating with the tour guides and the chief operations officer to give the best service to our death road survive passengers.
×

Hi, My name is Helen Lijeron Bernal, I am in charge of making your biking tour be safe, with a great equipment, with responsable, professional and friendly guides and drivers. Basically make your trip the unforgettable and with high quality experience ever… I am also the biking operations manager of the best biking tour company in the whole Bolivia. Within my functions are to control every single detail, which means: the bike status, assign one guide and driver for every group, organize the tour we promise to our costumers and make a perfect service. About me I can say that I love to be a responsable person, passionate and kind with my co workers, I love: overcoming in all senses, to create better opportunities for the company I work with, for myself and also my coworkers. I feel so committed to Altitude. Personally I really appreciate my time with Family, my studies and my job, that is why day by day I feel that I am growing with my passion and thanks to Altitude that became my second family I can make my goals become true.
×

I’m 28 years old , Commercial engineer, professional classic guitarist and professional BMX pilot , i define myself as an adventurous person who likes to leave constantly his comfort zone, which makes me look for challenges all the time. I am always looking for excuses to travel and explore new places in the world, meet new cultures and learn new languages, i currently speak 4 languages ​​(Spanish, English, German and Swiss German). I do not like monotony, so I’m always in constant movement. I love Bolivia in his entire splendor and every day I let myself be surprised by his cultural and scenic beauty.
×

I am Maria de los Angeles, I have been working in tourism field for more than ten years this time of experience allowed me to develop my career in several stages of this exciting occupation. Each work developed was a goal set and achieved with great satisfaction. From my first steps in a small inbound operator, to direct contact with local communities and currently working within one of the fastest growing companies in Bolivia as it is Altitude DMC . All of that has enriched my personal and professional growth.
×

Altitude was born with an enterprising, dreamer, passionate, professional spirit with an extreme obsession focused on achieving service excellence such as its CEO and founder Dayner Valda Montenegro, in addition to it, our boat captain and core of this fireball, whom insanely loves our country. Our founder’s academic education in Economics made possible the creation of Altitude as a sustainable company in all aspects financially, socially and environmentally, with a long-term projection. Our CEO values frame the company within the honesty, decency and deep love for their children, which reinforces the ties of love and companionship within the company. The vision of our company is to develop a Bolivian company with a Japanese mentality that is capable of providing a quality service with constant updating and training of all team.